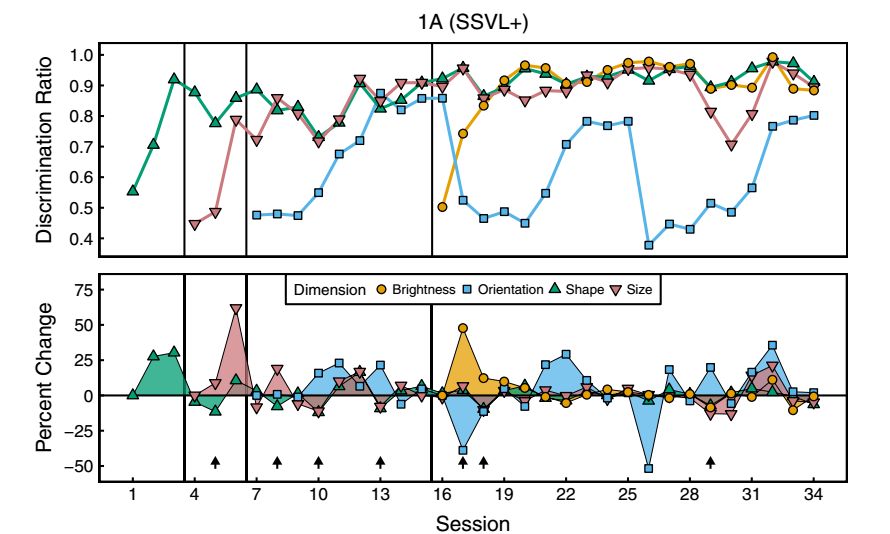 We trained six pigeons in a stagewise Multiple Necessary Cues (MNC) go/no‐go task to document the dynamics of discrimination learning involving increasingly complex visual stimuli. The compound stimuli were composed from four dimensions, each of which could assume either of two extreme values or their intermediate value: Shape, Size, Line Orientation, and Brightness. Starting with a stimulus composed entirely from intermediate values, we replaced those values with each of the two extreme dimensional values in four successive stages, thereby increasing the stimulus set from 2 in Stage 1 to 16 in Stage 4. In each stage, only one combination of values signaled food (S+), whereas the remaining combinations did not (S−s). We calculated the rate of pecking during the first 15 s of each stimulus presentation and, in any given stage, training continued until the rate of responding to all of the S−s was less than 20% of the rate of responding to the S+. All pigeons successfully acquired the final discrimination, suggesting that they attended to all of the dimensions relevant for the discrimination. We also replicated the key results of prior MNC studies: (1) the number of extreme dimensional values in each stage was positively related to the amount of training required for pigeons to acquire the discrimination; (2) attentional tradeoffs were most often observed when three or four dimensions were being trained; and (3) throughout training, the number of dimensional values in the S−s that differed from the S+ was positively related to their discriminability from S+.