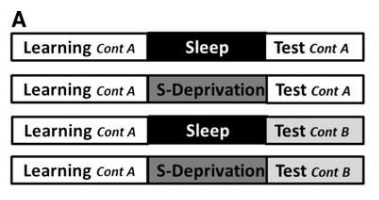 Sleep supports the consolidation of memory, and it has been proposed that this enhancing effect of sleep pertains in particular to memories which are encoded under control of prefrontal–hippocampal circuitry into an episodic memory system. Furthermore, repeated reactivation and transformation of such memories during sleep are thought to promote the de-contextualization of these memories. Here, we aimed to establish a behavioral model for the study of such sleep-dependent system consolidation in rats, using a go/nogo conditional discrimination learning task known to essentially depend on prefrontal–hippocampal function. Different groups of rats were trained to criterion on this task and, then, subjected to 80-min retention intervals filled with spontaneous morning sleep, sleep deprivation, or spontaneous evening wakefulness. In a subsequent test phase, the speed of relearning of the discrimination task was examined as indicator of memory, whereby rats were either tested in the same context as during training or in a different context. Sleep promoted relearning of the conditional discrimination task, and this effect was similar for testing memory in the same or different context (p < 0.001). Independent of sleep and wakefulness during the retention interval, animals showed faster relearning when tested in the same context as during learning, compared with testing in a different context (p < 0.001). The benefitting effect of sleep on discrimination learning was primarily due to an enhancing effect on response suppression during the nogo stimulus. We infer from these results that sleep enhances memory for inhibitory behavioral control in a generalized context-independent manner and thereby might eventually also contribute to the abstraction of schema-like representations.