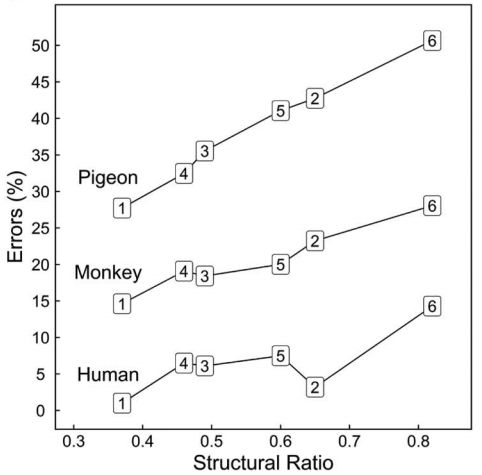 In a seminal study, Shepard, Hovland, and Jenkins (1961; henceforth SHJ) assessed potential mechanisms involved in categorization learning. To do so, they sequentially trained human participants with 6 different visual categorization tasks that varied in structural complexity. Humans’ exceptionally strong performance on 1 of these tasks (Type 2, organized around exclusive-or relations) could not be solely explained by structural complexity, and has since been considered the hallmark of rule-use in these tasks. In the present project, we concurrently trained pigeons on all 6 SHJ tasks. Our results revealed that the structural complexity of the tasks was highly correlated with group-level performance. Nevertheless, we observed notable individual differences in performance. Two extensions of a prominent categorization model, ALCOVE (Kruschke, 1992), suggested that disparities in the discriminability of the dimensions used to construct the experimental stimuli could account for these differences. Overall, our pigeons’ generally weak performance on the Type 2 task provides no evidence of rule-use on the SHJ tasks. Pigeons thus join monkeys in the contingent of species that solve these categorization tasks solely on the basis of the physical properties of the training stimuli.