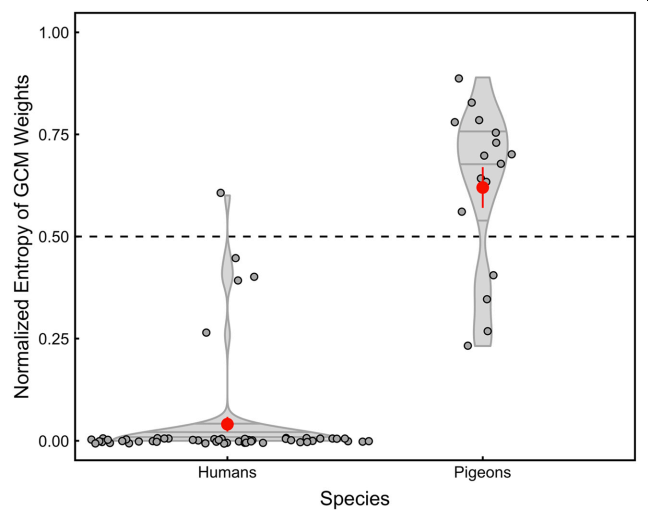 Selective and distributed attention in human and pigeon category learning

Attention to relevant stimulus features in a categorization task helps to optimize performance. However, the relationship between attention and categorization is not fully understood. For example, even when human adults and young children exhibit comparable categorization behavior, adults tend to attend selectively during learning, whereas young children tend to attend diffusely (Deng & Sloutsky, 2016). Here, we used a comparative approach to investigate the link between attention and categorization in two different species. Given the noteworthy categorization ability of avian species, we compared the attentional profiles of pigeons and human adults. We gave human adults (Experiment 1) and pigeons (Experiment 2) a categorization task that could be learned on the basis of either one deterministic feature (encouraging selective attention) or multiple probabilistic features (encouraging distributed attention). Both humans and pigeons relied on the deterministic feature to categorize the stimuli, albeit humans did so to a much greater degree. Furthermore, computational modeling revealed that most of the adults exhibited maximal selectivity, whereas pigeons tended to distribute their attention among several features. Our findings indicate that human adults focus their attention on deterministic information and filter less predictive information, but pigeons do not. Implications for the underlying brain mechanisms of attention and categorization are discussed.

I wrote a post related to this paper here.