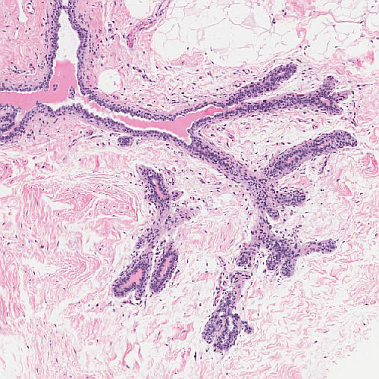 Pathologists and radiologists spend years acquiring and refining their medically essential visual skills, so it is of considerable interest to understand how this process actually unfolds and what image features and properties are critical for accurate diagnostic performance. Key insights into human behavioral tasks can often be obtained by using appropriate animal models. We report here that pigeons (Columba livia)—which share many visual system properties with humans—can serve as promising surrogate observers of medical images, a capability not previously documented. The birds proved to have a remarkable ability to distinguish benign from malignant human breast histopathology after training with differential food reinforcement; even more importantly, the pigeons were able to generalize what they had learned when confronted with novel image sets. The birds’ histological accuracy, like that of humans, was modestly affected by the presence or absence of color as well as by degrees of image compression, but these impacts could be ameliorated with further training. Turning to radiology, the birds proved to be similarly capable of detecting cancer-relevant microcalcifications on mammogram images. However, when given a different (and for humans quite difficult) task—namely, classification of suspicious mammographic densities (masses)—the pigeons proved to be capable only of image memorization and were unable to successfully generalize when shown novel examples. The birds’ successes and difficulties suggest that pigeons are well-suited to help us better understand human medical image perception, and may also prove useful in performance assessment and development of medical imaging hardware, image processing, and image analysis tools.