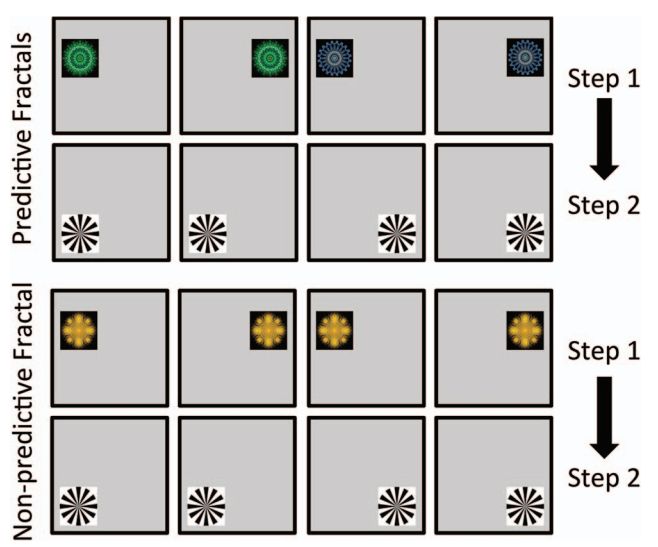 We report a novel method for investigating the acquisition of anticipatory responding in the pigeon. Four pigeons (Columba livia) received food for pecking a starburst target stimulus displayed in the bottom-left or bottom-right portion of a computer screen. The target stimulus was preceded by 1 of 3 fractal images displayed in either the upper-left or upper-right portion of the screen: 1 of the fractals was perfectly correlated with the target appearing in the bottom-left, the second fractal was perfectly correlated with the target appearing in the bottom-right, and the third fractal was uncorrelated with the location of the target. The pigeons learned to anticipate the location of the upcoming target stimulus, because they were faster to peck the target stimulus on trials that involved a predictive fractal than on trials that involved a nonpredictive fractal. In a later phase, we reversed the signaled target location of each of the 2 predictive fractals. After an initial disruption in performance, the pigeons successfully learned the new stimulus assignments, exhibiting the same pattern of responding as during the initial training phase. Overall, the results document the utility of this novel training procedure and further underscore the role that associative processes play in anticipatory responding.